MDI-NEPAL has been able to receive different national and international awards at different times.

Minister for Population and Environment Mr. Jay Dev Joshi awarding ‘Adaptation at Scale Prize 2016’ to Mr. Khop Narayan Shrestha, Executive Director of MDI Nepal with cash prize of 10,000 Pound in recognition for innovative solutions to scale-up climate change adaptation in Nepal from the Ideas to Impact program funded by the UK Department for International Development (DFID) on 16 December 2016.

Other 14 organizations of Nepal have also been awarded with this prize for their innovative effort in the field of climate change adaptation. News Clips link Republica

Honorable Prime Minister Mr. K. P. Sharma Oli awarded “Jagadish Ghimire Memorial Social Service Award, 2072” to MDI Nepal on the auspicious occasion of 20th General Assembly Meeting of the National NGO Federation of Nepal held on November 23, 2015 in Kathmandu. This award was set up by NGO federation of Nepal in the memory of its late former founder chairman Mr. Jagdish Chandra Ghimire who is recognized as renowned and sacrificing social worker and talent littereate who has written a popular autobiography ‘Antarman Ko Yatra’ which literally means journey of inner feelings. . The award was distributed in the first time in recognition of the remarkable works done in the field of social services and livelihood promotion of locals. The award was received by Mr. Khop Narayan Shrestha, Executive Director of MDI Nepal with a total cash prize of NRs. 25,000 and certificate of appreciation. 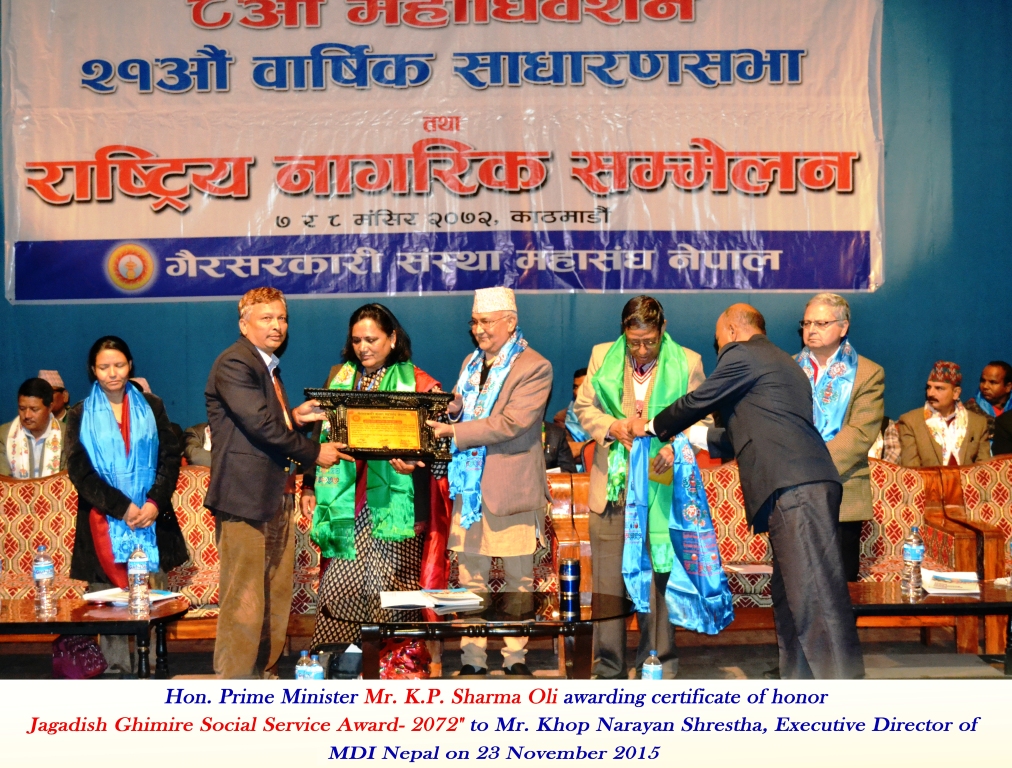 Hon. Prime Minister Mr. Jhala Nath Khanal awarded with a cash prize of Rs. 50,000 and a certificate of award to Mr. Khop Narayan Shrestha, Executive Director of MDI Nepal in a award ceremony organized by Ministry of Environment, Nepal on 5 June 2011, ‘World Environment Day’ for the outstanding works done in the field of conservation farming in hill slopes of Makawanpur and Udaypur districts of Nepal. The organization is active in planting different fruits and NTFPs in marginal lands in hill slopes following different ambits of agroforestry systems. Some 4 million plant species of banana, pineapples, citrus

, broomgrass and various fodder species have been planted in approx. 1300 ha. covering almost 4500 families. The project is supported by UN World Food Programme, the Embassy of Denmark, UNDP GEF Samll Grant Programme, Poverty Alleviation Fund and others. The global environment theme of this year was- Forests; Nature at your service.

MDI-NEPAL and The Asociación Forestal Integral San Andrés, Petén (AFISAP) in Guatemala were awarded 2011 UNEP Sasakawa Prize, worth USD 100,000(equally distributed) recognizes the most innovative, groundbreaking and sustainable grassroots environmental initiatives. Whose theme this year is “Forests for People, Forests for Green Growth” in support of the 2011 International Year of Forests.

MDI has been awarded with US $ 1,500 as a research grant from UNEP Eco-peace Leadership Center (EPLC) in partnership with Kwangon National University of South Korea to conduct research work on “Conservation Agriculture in Sloping Uplands affected through Shifting Cultivation Practices”. This grant will be used for developing a sustainable farming system in the sloping hills. The research work will be carried out in Chuwarpkha village in Handikhola VDC-7 of Makawanpur district in the central region of Nepal.

The project entitled ‘Mitigation of the Effects of the Carbon dioxide and other Greenhouse Gases by Controlling Slash and- Burn Farming’, funded by UNDP/ Global Environment Facility/Small Grants Programme has won the ‘Ryutaro Hashimoto Asia Pacific Forum for Environment and Development (APFED) Award 2008’-a GOLD (1st) prize in recognition of the outstanding contribution done in promoting environmental management and sustainable development. Mr. Masayoshi Namiki, Vice Minister of the Environment, Government of Japan awarded the prize to Mr. Khop Narayan Shrestha, Coordinator of the MDI-Nepal in the 4th Plenary Meeting (award giving ceremony) at Davao, Phillipines on 25 July 2008. This gold APFED Award established by the Asia Pacific Forum for Environment and Development in memory of former Japanese Prime Minister Ryutaro Hashimoto carries a purse of US$20,000. It also consists of 2 silver prizes of US$7,000 each and 5 incentive prizes of US$ 2,000 each. 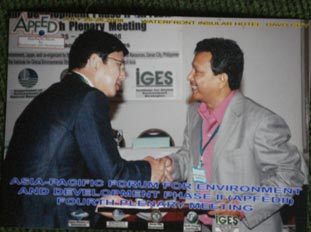